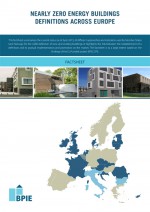 According to the EPBD, [a nearly zero energy building is a] “building that has a very high energy performance… [ ]. The nearly zero or very low amount of energy required should to a very significant extent be covered by energy from renewable sources, including renewable energy produced on-site or nearby.” Briefly, the Directive only defines the big picture giving considerable latitude to Member States to refine it. Therefore, the nZEB concept is very flexible with no single, harmonised nZEB definition throughout the EU. Member States are responsible to define in their national plans what constitutes an nZEB while considering the feasibility of implementing such a concept in their national contexts. These definitions were expected to be included in the MS National Energy Efficiency Action Plans which are expected to be reviewed by the Commission by the end of 2015.

BPIE summarises in a comprehensive factsheet the current status of different approaches and indicators used by EU Member States (and Norway) for the nZEB definition of new and existing buildings. It highlights the link between the establishment of a definition and its gradual implementation and promotion on the market. The findings show that the levels of ambition in defining an nZEB vary across the board. To date, a definition is available in 15 countries (plus Brussels Capital Region and Flanders). In a further 3 countries, the nZEB requirements have been defined and are expected to be implemented in the national legislation. The situation for existing buildings is arguably more difficult as of now only 8 countries have formally established nZEB requirements. These numbers show that there has been considerable progress made since 2013, but there is still a long way to go.

A clearer definition of the desired energy performance of a nearly Zero-Energy Building in the European legislation would support a more coherent approach by national governments. In consequence, this would trigger more innovation in the field and support a technology leadership of Europe in the field.