This policy brief, only available in German, stresses the role of the long-term renovation strategies (LTRS) in the framework of ambitious and coherent national and European climate policies in the buildings sector. The implementation of the national LTRS in Germany should follow the European regulatory guidelines and is a chance to accelerate climate protection in the buildings sector. 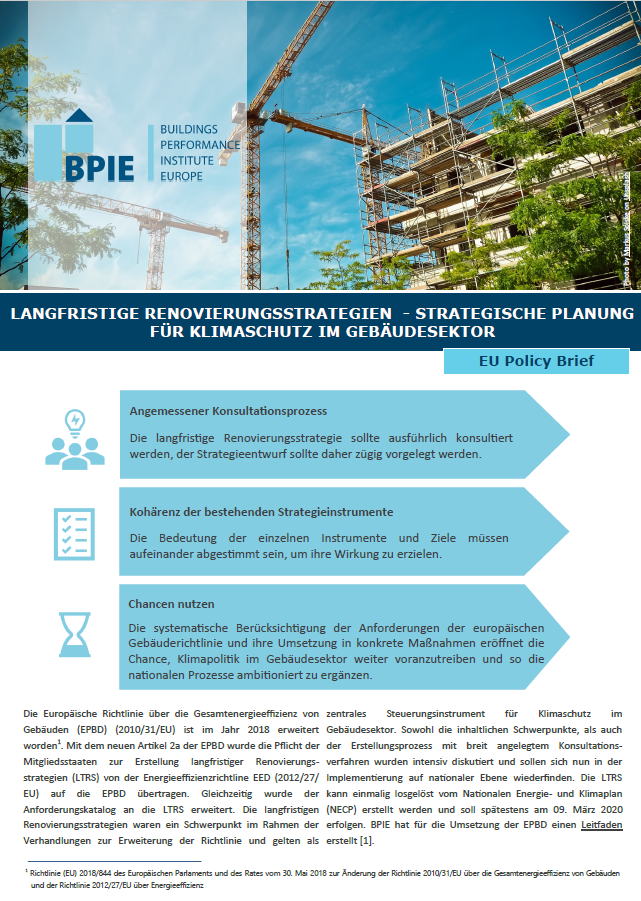 The European Energy Performance of Buildings Directive (EPBD) (2010/31/EU) was amended in May 2018. With the new Article 2a of the EPBD, the obligation of the Member States to draw up long-term renovation strategies (LTRS) was transferred from the Energy Efficiency Directive EED (2012/27/EU) to the EPBD. At the same time, the requirements for the LTRS were extended. The long-term renovation strategies were a priority in the negotiations of the amending directive and are regarded as a central steering instrument for climate protection in the building sector. Both, the main topical areas and the drafting process with a broad-based consultation procedure were intensively discussed and should now be reflected in the implementation at national level.

This briefing summarises some important EPBD requirements relating to the long-term renovation strategy process in Germany, and reminds that next year submission would be an opportunity for Germany to be more ambitious and make the new LTRS raise its standards, after being considered in 2016 by the Joint Research Center (JRC) of the European Commission as one of the three “non-compliant” strategies.

The paper calls for coherence of the LTRS with existing national policy-making and use it as an opportunity to further advance climate policy in the buildings sector and ambitiously complement national strategy processes.

We use cookies mainly to provide social media features and to analyse our traffic. For more information about our Privacy Policy, visit this link. Please agree by clicking the 'Accept' button.
Accept
Read more
Change Settings
Trigger
Trigger